I was meandering up and down the aisles of the bargain section of Books-a-Million last week, and the cover of this Illustrated Classic caught my eye: 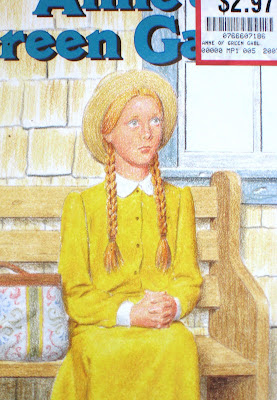 Now, what is the most important thing about Anne of Green Gables? What would be written on her fictional tombstone? ANNE SHIRLEY: Her Hair Was So Red. What, then, is happening here? That hair is yellow. You can't give Anne Shirley yellow hair. Mystified, I began to page through the book, and discovered that yellow hair is the least of poor Anne's worries. 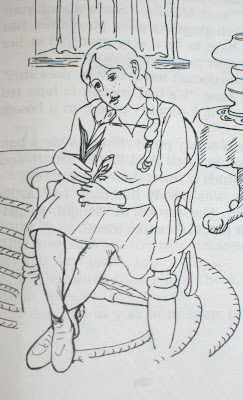 This is clearly an illustration from some alternate Anne of Green Gables, one in which Marilla sends her away to an institution instead of keeping her, and grief renders her into a transcendental halfwit. She either eats flowers or speaks to them. Her chair dissolves beneath her feet; she is no longer of this world. 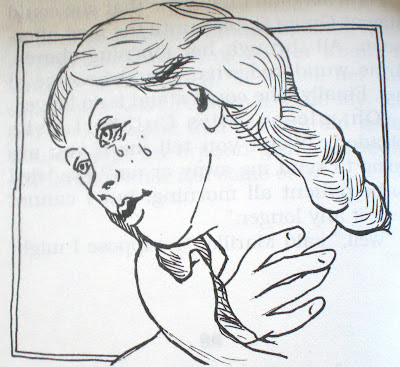 It is a tragedy indeed when a person possesses such a small intellect that she cannot even choke herself properly, for it is she who needs choking most of all. 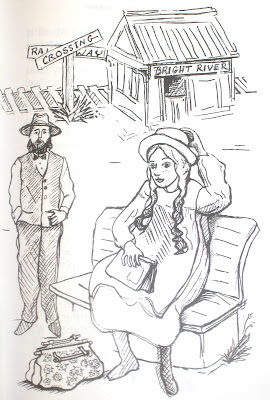 Much better. After all, L.M. Montgomery never explicitly states that Anne is not a formidable giant composed entirely of spare parts--a backwards arm here, an animal foot there--who makes men and buildings appear as adorable toys in comparison with her. Anyway, she certainly took that train to the right town. Physical deformities appear to run rampant in the Avonlea community. 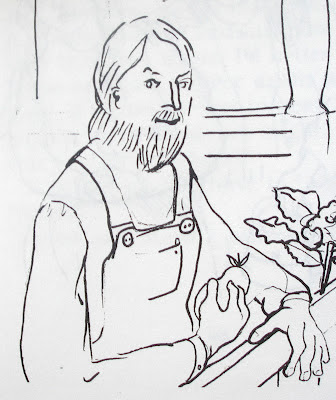 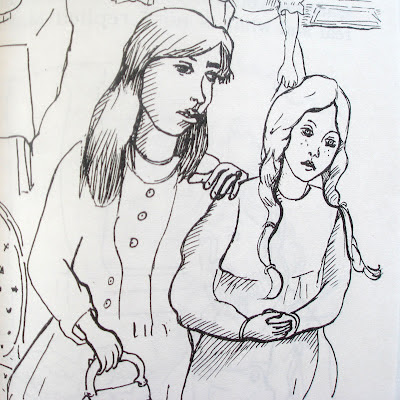 Diana got bad squeezed by her mother's vagina, 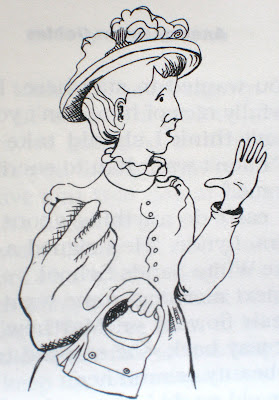 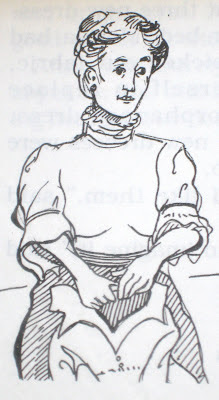 Marilla is a T-Rex, 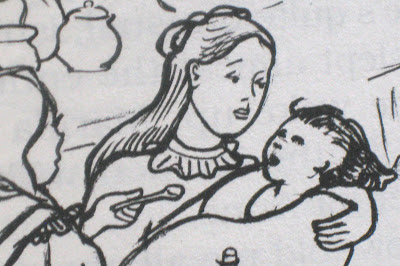 and Minnie May is an actual demon. Thank God that Gilbert is just as handsome as I always imagined him: 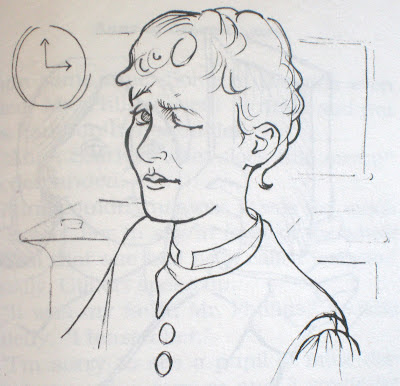 Mmm mmm. Little surprise that Anne loses her mind when he criticizes her looks: 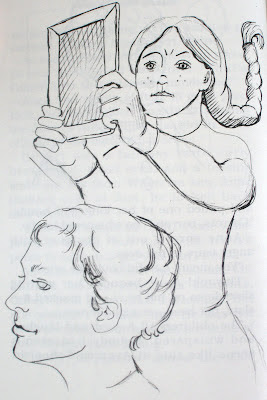 When a golden god calls you Carrots, what choice do you have but to "lift" your "slate" "above" your "head" and bash him with it? I hope his brains pour out of his ear--which appears to be one of those White Castle chicken rings. No wonder you eventually fall in love with him, Anne. Don't worry, you'll end up getting married, but not before this rare orchid of femininity does: 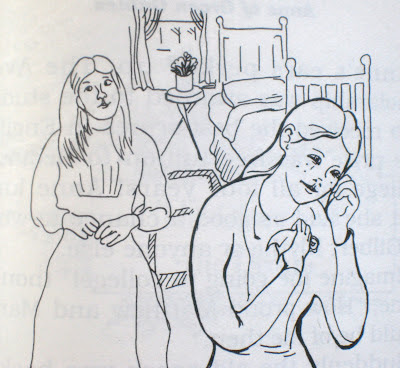 Will somebody please slip a diamond on this girl's bulging ring finger already? It is huge with longing. Be patient, though, Anne. Your day will come. Your dress may not be as beautiful as this one: 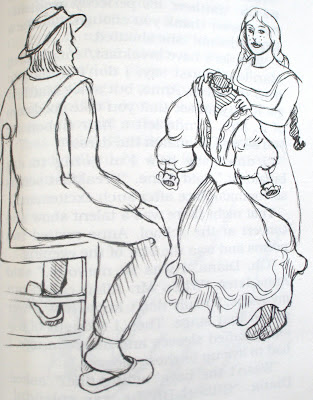 and Gilbert may not be as happy as he was the day his ten-year-old college friends lifted him by the ankles and inserted celebratory hands into his nearest joyful orifice: 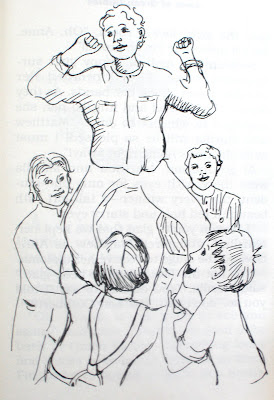 but a halfwit orphan giant with a wolf foot and yellow hair must take what she can get.
Posted by Patricia Lockwood at 12:22 PM

OMG I am laughing so hard. Thanks for paying the $3 & sharing that.

I thought the conch/human hybrid picture would be quite hard to beat, but the bulging ring finger one is quite something.

You've got this entire living room laughing on my laptop, cats and all. Thanks for this.

It's the best three dollars I ever spent, no contest. I tried to post all of the craziest ones, but there were seriously dozens and dozens competing for the honor. Instead of making ten illustrations that looked fine, the artist decided to make fifty that all looked insane.

This is what happens when you study art. Diana got bad squeezed by her mother's vagina made me say HOLY CHRIST loudly at my glamorous job.

Lucky for me, I was reading In Cold Blood while everyone else was reading the AOGG books. I was precocious, but had bad dreams.

1. the bulging ring finger
2. the giantess came to the right town with her animal foot
3. Diana got bad squeezed by her mother's vagina.

The Anne books might have given you bad dreams as well, Rebecca, for entirely different reasons. I've had a few in my day. They basically consist of endless descriptions of sunsets endlessly recited by a girl with braids.

No, Laura, thank you!

The saddest part? That person draws better than I do. A lot better.

Since all women, most children, some dogs, and a few men draw better than that illustrator, there must have been some aesthetic-&-commercial theory at work. I mean, the publishers could have gone into the break room or out onto the sidewalk where the smokers are gathered or round the corner and down the alley where the winos are collapsed and the superheros are changing into their costumes, picked someone at random, and gotten way better drawings. And therefore they must have done it on purpose--chosen lousy drawings like that. What were they thinking? "Children will be drawn in by the thought that this is a book they might have illustrated"? "People will throw it against the wall in annoyance and ridicule, damaging it, and they'll have to buy another one"?

They must have been thinking something.

Also, Richard speaks the truth. I picked up a couple other Illustrated Classics at the same time, and they're all terrible, even though they're illustrated by different people. Something is afoot.

Shannon said...
This comment has been removed by the author.
9:19 AM

You need to open some kind of freak-show children's library.

I SAW THAT DELETED COMMENT! You totally thought I drew these, didn't you?

i never even read this.
but now i did.

It needed to be said! By someone who cared.