The Eyes, the Not-Eyes, and the Eyesight

Internet I love you and I need your help.


Elegant Choice went to the eye doctor the other day and the news was very bad: he has developed a rare* kind of cataract in both his eyes, and he is going blind. He needs total lens replacements as soon as possible.

I asked him to write it out for you. Here is what happened:

"I began to notice significant deterioration in my vision in both eyes a couple weeks back, so I scheduled an appointment with an ophthalmologist.  By the time I went to see him, my right eye registered little more than the shape and color of my surroundings, while my left eye was still functional for basic tasks like driving and reading, though increasingly blurry. (This is especially troubling since 100 percent of my job is reading.)

The ophthalmologist found posterior subcapsular cataracts in both eyes. This is a kind that shows up in people with untreated Type 1 diabetes (which I don't have) or hardcore steroid users who inject human growth hormone into their bottoms (which I ... do not do.) These cataracts can develop in a matter of weeks or months, and they're famous for quickly getting worse, which is why I need surgery as soon as possible.

The good news: My DESCENT INTO BLINDNESS is reversible through a series of four surgeries, two per eye, starting with the right. The surgeon opens the eye, then slips in a little tool to shatter the existing lens and cataract. The shattered lens is sucked out and replaced with an implant called an intraocular lens. I go home and wait a few weeks, during which time my eye begins to incorporate the implant, and scar tissue forms. Then I go back in for an outpatient laser surgery to remove the scar tissue. Then we do it all again with the left.

If all goes well, I'll see like a 50-year-old with bifocals for the rest of my life. And the cataracts won't come back, because these implants can't develop them.

The bad news: The multiple surgeries are spaced over several months to allow for healing, during which time my vision is in a state of serious flux. And the whole process costs a lot of money because of my unique situation -- I require the expensive lens implants because I have an unusual type of cataracts, but since I don't have Type I diabetes and I'm not an 80-year-old, insurance companies only cover a small portion of the procedure. And also for that reason, I have to pay up front.

Right now, my first surgery is scheduled for June 27, but I might be able to expedite it if I can get the money together sooner. The procedures cost about $5,000 per eye, for a total of $10,000."

$10,000 is a pre-op estimate; the surgeries may end up costing slightly more or less. (I'll update the post later in the week with an exact breakdown of costs.) The lens implants are called TECNIS, which is EXTREMELY from the future as conceptualized by the year 1981. We watched an instructional video about the surgery and it was so sad because it was all footage of 90-year-olds holding up magnifying glasses to the phone book, and the voiceover kept saying things like, "You'll be able to go boating ... and do your Watercolors again!" We kept collapsing into inappropriate laughter every time a man turned to the camera and said, "I thought I would never see a golf ball again -- or my wife's face." IT WAS REALLY DEPRESSING, but it is also really beautiful that we live in an age where we can basically implant space glass into an editor's eyeballs so he does not have to go blind forever.

Actual quote from the brochure: With the TECNIS Multifocal Lens, you may comfortably enjoy activities like reading a menu in a dimly lit restaurant, taking a walk at dusk, or even driving at night. Then there is a pic of a ballin' dude reading the FUCK out of a menu in an outrageously dark restaurant to his hot bride: 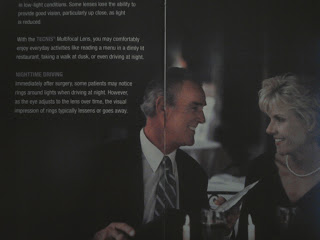 I posted about it on Twitter because I was basically losing my mind with worry and the outpouring of support was astonishing; people suggested that I do this so I am doing this because they wanted to help, which made me cry, and some quote about the color purple, if you walk past the color purple in a field and do not make it donate money to you so your husband can stop going blind, then you are being pretty mean to God.

(As I understand it.)

ALSO, my friend forever Greg has volunteered to contribute some HORSE_EBOOKS GLASSES to the cause, so if you donate you will be entered to win one!

Here is the button.

HUGE thanks to @kathrynborel, @colsonwhitehead, @slennonhugs and anyone else I am forgetting for helping me figure out how to set this up when I had no idea what to do!


* ETA: Apparently the cataracts themselves are not rare -- it's just highly uncommon for a 30-year-old to develop them. Sorry for the imprecision!
Posted by Patricia Lockwood at 8:38 PM

I am so sorry for your circumstances. Sometimes it's hard, but remember all that you do have to be thankful for. If all of your twitter followers donated just $1 your hubby can afford the surgery he needs. We adore you both and you have all of our support!

If childs have tumblr, them can reblog my post: http://michaelrobbinspoet.tumblr.com/post/23088109068/please-help-tricia-lockwoods-husbands-eyes

Remember that you are loved.

will you post a picture of you & your husband? a big Berenstein bear hug goes out to you bofe

Quick question, not sure the ins and outs of paypal, but will my donation be anonymous?

I really hope my measly donation helps you out. My mother was recently diagnosed with Aged Macular Degeneration so I have a small sense of what you're going through. Different situations of course, but still the same - sight. Best of luck in your journey ahead. Keep your heads up! Hugs!!

I am so sorry to hear this!

If you send me your address i will send you my book about fundraising, for free.

I think this will help you.

It includes how to throw a fundraising event, and also how to do email appeals.

My email is info at wildwomanfundraising.com

Patricia, I don't know you but I am a friend of Michael Robbins. It is an outrage that your insurance won't cover a condition that, whatever its etiology, is clearly devastating. That is total bullshit. Happy to donate, and good luck to you both. Sandra.

I don't know either of you but I saw the post on Twitter and I like to help others so I just sent $5 your way. I hope it helps!

If you're willing to have something in your eyeballs shattered and sucked out, I can damn well throw a few bucks your way to facilitate. Good luck, and @mattfraction sent me.

Can you share more information about why insurance won't cover this? I don't understand... I've never heard "It's a rare condition, so we won't cover it."

Dontion made. No questions asked. Matt Fraction sent me so it must be good.

Best wishes for a full recovery.

Of course. The $10,000 is what the insurance WON'T cover. They pay a portion, but this is what we're expected to pay out-of-pocket, because the surgeries are considered to be "elective." That's my understanding.

I donated but I don't know why. I never donate online. I don't follow you on twitter. Yet you have my five dollars. How did that happen?

I'm an Ophthalmologist and was sent to this blog by a tweet by Damon Lindelof. Cataracts are not a rare condition. If your husband has insurance, which it sounds like he does, his surgeries are completely covered. The astronomical $10,000 you are being quoted by an ophthalmologist is to cover the cost of a multifocal lens (The Tecnis) which has a cost to the surgery center of about $1000. The balance would be for "refractive services" by the ophthalmologist (which is the most money I have EVER heard of being charged for refractive services). Your husband could have a standard monofocal lens and wear reading glasses to read with and not have to pay the $10,00 in out of pocket expenses. (He could also have lenses placed for monovision which would have no out of pocket expense). Multifocal lenses, while great, have their own set of potential drawbacks (glare, potential for decreased best corrected visual acuity, etc.) I have to question the ethics of the Ophthalmologist your husband saw in telling him he had to get the multifocal lens and pay the outrageous fees.

After reading the link Kathryn Borel posted, I went to make a donation to help in some small way but saw that you'd already reached your goal. Wow. Sometimes people are just decent.

Sending instead best wishes for a successful operation and speedy recovery.

Pattycakes!! I was just the other day wondering why your blog lay dormant. But I missed this post when it happened and now I'm too late to donate. I saw a few tweets referencing you and Kickstarter but I seriously thought it was some dumb poetry bullshit. Who's the shit now? Me. I'm the shit. Anyway, if you need more moneys, just email me, 'kay? xo

Elisa, Tricia's covered, but I could use some money. Will backchaneel you with deets. Thanks for the offer!

I am actively angry at myself for seeing this too late to donate. <3

i think this is a good place to either post support or good wishes.

because in my opinion - which likely means nothing - second guessing about insurance coverage or diagnosis here strikes me as obnoxious. seems like email is better suited to such things. or something.

of course, that's just me.


best wishes to you and him, patricia!! i'm so glad you were able to raise the funds!!!!

Sure, Michael, I'll just need a notarized doctor's note proving you or someone you love is on the verge.

I'm sorry I just saw this. Bullshit, I'm donating anyway. If you have more than you need, go out and celebrate.

I'm glad I was able to kick in to the kitty.

Patricia Lockwood said...
This comment has been removed by the author.
8:40 AM

jmf243, thanks for the additional information and for your concern. Cataracts themselves are not rare, but I was given to understand that posterior subcapsular cataracts in a 31-year-old with no history of diabetes or steroid use were uncommon. We discussed monofocal lenses with the doctors, but the cheaper lenses weren't covered by insurance either -- they would have cost a few thousand less, but they weren't fully covered. In addition to the multifocal lenses, which seemed like the best choice for his situation, he will need to wear bifocals anyway. He also has astigmatism and potential glaucoma in his right eye, so that might be complicating his particular case? Thanks again for your post, I do appreciate it.

ELISA, MICHAEL, PHOEBE, DOTTIE, WHIMSY -- YOU'RE ALL WRITERS SO YOU GOTTA SAVE YOUR MONEY FOR QUILL PENS

It might be more cost-effective to have a whole new pair of eyes installed, rather than repairing a set that has been used for over 30 years.

Thanks for important info.

Thanks fir sharing this information with us :)