Dispatches from the Front LINES, It Is a Pun

I rose this morning and said to myself, "It's a dazzling day, the sun is a fiery phoenix, the birds let loose with craps of joy, and the Phelps crazies are here in town to protest. Time to make a damn sign."

"What should we write?" Elegant Choice mused. "The temptation is to write something along the lines of GOD IS GAY, or, more cryptically, GAY GOD!"

"How about something more wholesome? How about a statement from the past? How about SIT ON A HOT CENT?"

"Too wholesome, I think."

It was. We found some sharpies and a hot-pink poster and set to work. The sharpies didn't show up very well on the posterboard, so I improvised a kind of hairy lunatic handwriting that was more or less legible. The result was this: 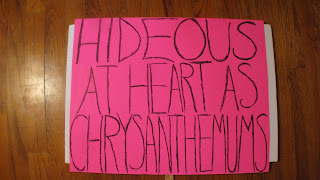 "Finished!" I announced. "Now, how should I dress?"

"Hmm. Like a milkmaid, if you can. Because GOD HATES SWEDEN too, apparently."

"I have just the thing."

When we arrived at the protest, I snuck up behind the Phelps people and stood near them for a while, to inject a little soy bomb into the situation. OH BLAST, the Phelps people were probably thinking, don't look now but there is a milkmaid behind us, undermining our hate effort with rotty poetry! 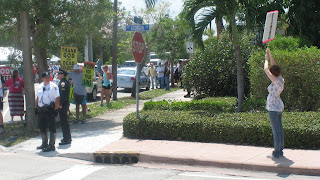 The biker gangs who populated the opposite curb failed to appreciate my nuances and began to taunt me, so I toddled over to the other side and explained that I was an undercover nonsense underminer, at which point they cheered and offered to carry my sign for me. 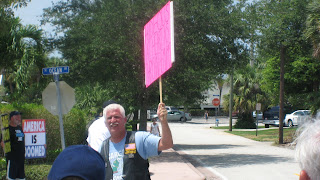 I believe this man went by the name of Skinner. I also acquainted myself with a T-Bone who offered to escort me home on his motorcycle. Man, I wish I had known that none of the counter-protesters were going to bring signs. I would have made dozens and handed them out, and you would have witnessed a parade of incoherence the likes of which our sodomite nation has never seen! 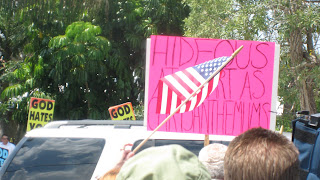 Posted by Patricia Lockwood at 12:31 PM

I would escort you home on my chopper, hot pink sign flailing in the wind behind us like Skydiving Barbie with a chute that refuses to open, were my chopper not a Kitchen Magician. Julianne fries, anybody?

I meant that I am making french fries from the body of the actress Julianne Moore. When she is gone I will start on Mandy Moore because, let's face it, during the holidays everbody wants Moore fries. *Sigh* My life has become one long, pathetic pun.

Wouldn't it be cool if this caught on and these were the standard anti-Phelps protest signs?

I am as always amazed and delighted by you and your ability to squeeze CHRYSANTHEMUMS onto that last line.

Admiral: In the future, whenever I am called upon to clarify a statement, I plan to say, "I meant that I am making french fries from the body of the actress Julianne Moore." It's the perfect all-purpose explanation. My thanks.

Valerie: We can only pray! When faced with signs that say things like FAGS DOOM NATIONS, your serious options are kind of limited:

Rebecca: It was a feat, I'll tell you what. GodDAMN that is a long word.

I wonder if they are so crazy that that are actually not crazy but government agents meant to distract us from the less crazy, more powerful crazies. That's how crazy they make me. But to you I say - GO! YAy!

Seriously. Their signs are so insane, and their behavior so cheerful, that it's hard to believe they're not performance artists of some kind, or, in your more intriguing formulation, secret government operatives.