IVVENILIA: OR CERTAINE PARADOXES, AND PROBLEMES

I. A Defence of Womens Inconstancy.
II. That Women ought to Paint.
III. That by Discord things increase.
IV. That Good is more common than Euill.
V. That all things kill themselues.
VI. That it is possible to find some vertue in some Women.
VII. That Old men are more fantastike than Young.
VIII. That Nature is our worst guide.
IX. That only Cowards dare die.
X. That a Wise man is known by much laughing.
XI. That the gifts of the Body are better than those of the Minde.

I've been thinking a lot about juvenilia lately. More specifically: when do you stop writing it? When does the writing of juvenilia end, and the writing of the Early Poems begin? Elegant Choice and I passed a terrifying hour last night hunting down and reading our old poems; his, influenced mostly by rum and James Wright; mine, influenced mostly by my robust belief that Jesus was Lord and loved to cram his muscular god body into tiny bread. Most of these poems have tragically been lost--I think I burned them when I decided that I was going to be a nun. Well, obviously. Not all are lost, though, despite the best efforts of my enemies. Here's the earliest one I can find, written when I was maybe fifteen:

Who will explode to make the next Chaos?
The white dwarfs and red giants
of the sky
have all died like dynamite at the guessing
of their names,
and worlds have risen from their shrapnel.
If that is all a universe can create,
then what greater thing must die
before new men are made?

That whooshing noise you hear is me blowing your mind--or rather, me making your mind DIE LIKE DYNAMITE. Hold on, are you ready? Because I'm about to do it again: 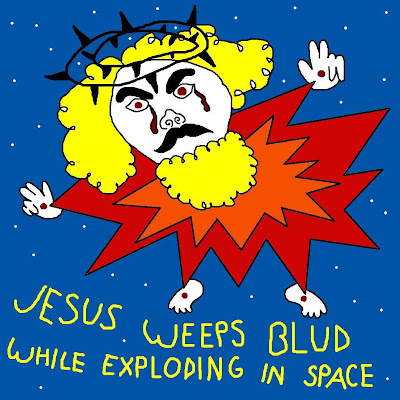 Posted by Patricia Lockwood at 8:22 PM

when plugged into Babelfish, says this:

"That said to you the devil, which has you the devil said," cried the very white dwarf Rumpelstiltskin, and pushed with the right foot before anger so deeply into the earth that it in-drove to the body, then packed it in its rage the left foot with both hands and died like the afire dynamite of stick, word.

It in-drove to the body is so sexy sounding! Also how he is a very white dwarf.

your bloggish area acts like a happy place i enjoy. i'm glad i wandered in.

i am not spam, my name is Ann
and i'm a poet in the frying pan.
visit my blog if you want or can.

Ann, you are delicious. Additionally, your blog is beautiful and I will visit it continually.

This is Kino, the poet of sound and image!

come and see the pretty chaos
in another form the map of the universe!

poet!
I would like you to contribute to the REVOLUTION OF THE MIND!